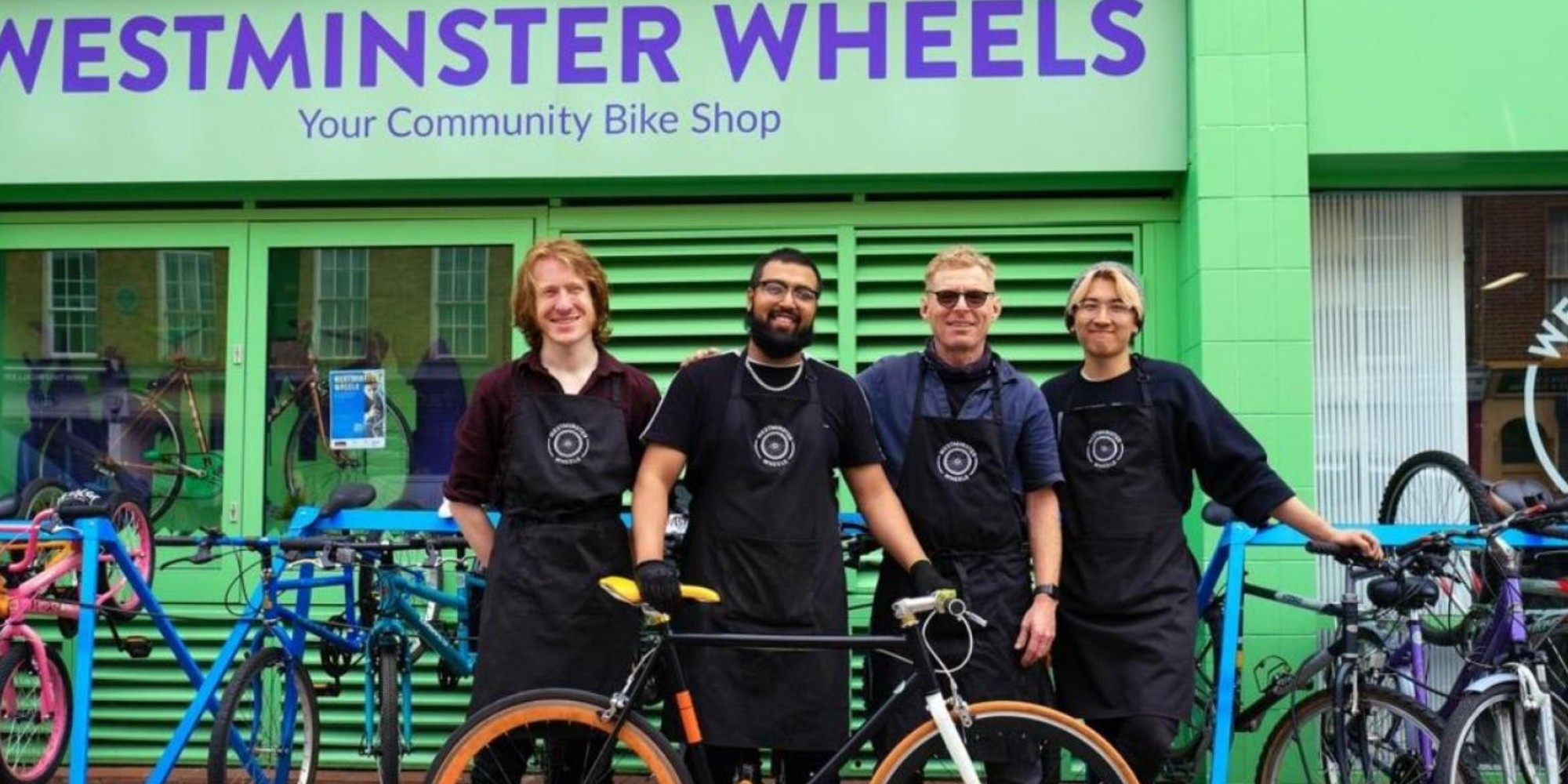 In a time of dark headlines surrounding a looming recession and high inflation, it’s great to see a program helping those most in need in our communities. Bike shop Westminster Wheels does just that, offering unemployed residents the chance to train as bike mechanics and get paid at the London Living Wage while they learn.

The store is located just off Edgware Road, one of the areas with the highest unemployment and health inequalities in Westminster. “We put them through an employability training course and put them on a living wage contract in London,” said Barnaby Stutter, project manager at Westminster Wheels. BikeBiz. “And while they’re getting a living wage in London, we’re paying for this City & Guilds tier 2 bike repair, so they’re being paid to learn.

“During this period, we try to bring them into the whole philosophy of professional life, like timing, presenting, having a little sparkle in the eye, a little liveliness in customer service and all these skills non-technical on top of the technical skills of bike repair.There is nothing worse than a miserable bike mechanic.

“I think those are the skills that are as important as the ability to fix a bike – the ability to diagnose the customer. This is super critical, especially since the bike industry has come to realize that 51% of the population is not male.

It has proven difficult to recruit young women, Stutter continued: “It’s seen as a very dirty and macho industry, but in reality some of the trendsetters and industry leaders are women. I think we really need to shout from the rooftops that there is a great career for women in the bike industry.

The program lasts six months, after which trainees have hopefully gained confidence as well as skills, Stutter said. “The number one thing I find important to instill in young people is eye contact, confidence, presentation. We guarantee that we will put them in front of potential employers at the end and we support them through that.

“Obviously they finish the course with a nice shiny CV because they will have their employability training, they will have their City & Guilds Level One or Two, and depending on the time of year and where we are in the program, they could take a first aid course or a fire marshal course or an occupational health and safety course – anything to pile on that resume.

“And then we put them in front of potential employers. We have worked quite deeply with Balfe’s Bikes and we work and reach out to people like Decathlon. And weirdly, we are in negotiations with Veolia, which are the waste collection services, they are now switching to e-cargo bikes. They use four-wheeled cargo bikes for micro-waste collection, and those machines are going to need maintenance. We are very keen to be part of the e-cargo bike revolution.

Real life experience
The program stakeholders are Westminster Council, Cycle Confident and Groundwork London. The real cogs of it came together at the height of the lockdown, Stutter explained, when there was a bicycle repair shortage.

“Westminster is acutely aware of the cycle shop deserts in the borough. Even the big chain stores cannot operate profitably on London rents. Many of them operate solely by negotiating rent-free periods, and their business plan is based on that.

Throughout the six-month program, trainees work alongside experienced bike mechanics refurbishing old bikes – 80% of which are sold at affordable prices to generate revenue for the store, and 20% are donated to the local community .

“What we’ve realized is that the community is in desperate need of repairs,” Stutter said. “We offer this as a community bike shop. Young people, when they have reached a certain level of skill and ability, they can do these repairs under our supervision. Two perfectly trained mechanics work alongside them. And we’ve seen the business side of it really explode, providing a real-life experience for young people.

As of June 2022, 30 Westminster residents have completed their six-month training since the store opened in March 2021, and most have gone on to find other employment, many in the cycling industry.

Chris Whiteley, who successfully completed his paid internship at Westminster Wheels and is now a full-time bike mechanic, said: “I first moved to London last year. I was homeless before coming here, so I moved in with my sister.

“I found a poster for Westminster Wheels when I was walking around one day and thought, I love bikes and would like to learn how to fix them. Westminster Wheels has completely changed my life. I went from not having no idea or what to do with my life to find a career that I could happily spend the rest of my life doing.

On the importance of providing this experience for young people, Stutter said, “It provides an environment for them to grow into. They have room to fail, but fail upwards. Timing, presentation, attitude will never be their main skills when they enter the project.

“I wouldn’t trade places with a young person these days, in terms of how society views them, how society takes care of them. I think the pressures on young people are awful. I’m kind of out comes the avuncular project manager, and you have to hear people’s stories, their stories of where they’re from and what they’ve been through, whether it’s as caregivers of sick relatives, whether it’s in the healthcare system.

“That’s where we draw our cohort, people who have fallen through the cracks because of life circumstances and it’s very difficult for a standard employer to take that into account in terms of productivity. We’ve really seen people grow and flourish.

On plans to expand later this year, Stutter said: “We would love to. We are heading into a deep recession. Youth unemployment is not massive right now in the borough, but it will only go one way.

“And we are in negotiations with other organizations. We actually have a fantastic program with Public Health England. There’s something called social prescribing, so you go to your GP, maybe with depression or diabetes, and they’ll say, there you go, I’m prescribing you a bike. We will provide 270 refurbished bicycles. They will go to various good causes, some of which will be for social prescription.

Recognizing that maintaining a bike can be expensive and a barrier to riding, the store will also be donating bike maintenance vouchers to low-income families in Westminster.

Priority to sustainability
Linking to Westminster City Council’s wider climate action plan, including its ambition to become a carbon neutral council by 2030 and a city by 2040, the scheme also has a strong focus on sustainability.

In its first year, nine tons of disused bikes that would otherwise have been thrown away were refurbished. The scope of the project has been made possible through the sponsorship of Westminster businesses including Capita, Ecoworld, Grosvenor, The Howard of Walden Estate, RMG, Westminster Community Homes, Ecoworld, HA Marks, Wates and Vital Energy.

“Over 60% of interns are now in full-time employment. If you are a keen cyclist or new to two wheels, please visit the Westminster Wheels shop on Church Street to meet the trainees and get expert advice on affordable bikes and maintenance.

“We’re a bit of a pilot project,” Stutter concluded. “I think other boroughs are looking at their location. Sometimes they don’t need retail space because some boroughs are blessed with fantastic bike shops, but they still have youth unemployment and there’s still a shortage of bike mechanics. bicycles. They might have a similar but different system there and other boroughs can tailor the project to their needs.